The journey so far

We started life as One Care Consortium Limited, set up as a vehicle to deliver the GP Access Fund programme between April 2014 and 31 March 2017.

Our members consisted of GP practices across Bristol, North Somerset and South Gloucestershire plus two local provider organisations, BrisDoc and GP Care. Our vision was to collaborate to cultivate innovative and responsive seven-day primary care.

The below document gives an overview of the projects that we were engaged with piloting over the three years of the GP Access Fund. 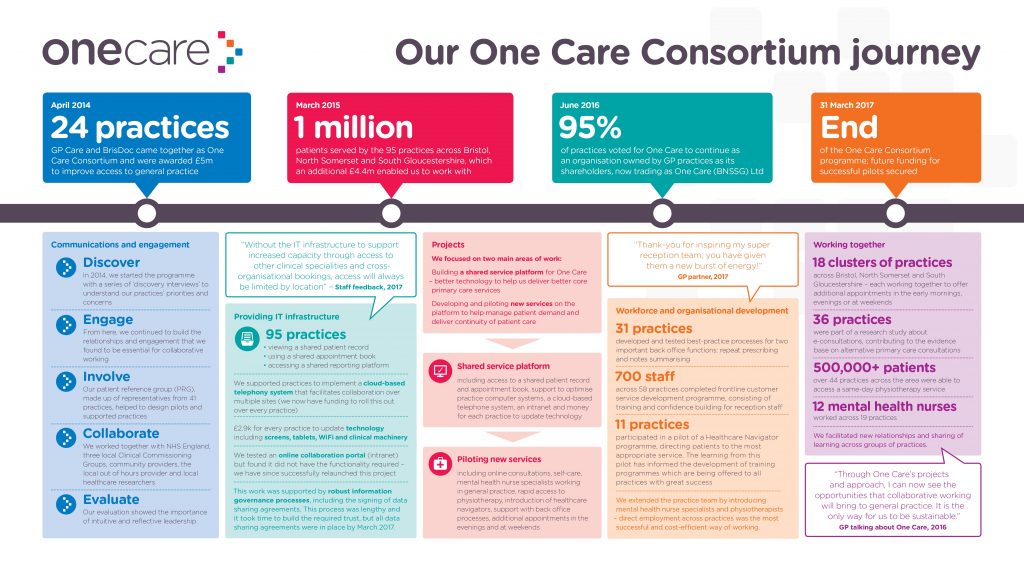 The GP Access Fund was initially known as the Prime Minister’s Challenge Fund.

The Challenge Fund’s call to action identified that practices need to work differently, to provide patient-focused and accessible services – including tailored services for vulnerable and diverse communities – and ensure that services are sustainable for the future.

Practices were invited to submit Expressions of Interest in December 2013 and in April 2014, the 20 successful pilot sites were announced. One Care Consortium was named as one of the PMCF Wave One pilot sites, along with 19 others.

Later in 2014, the Prime Minister announced a new second wave of access pilots. One Care Consortium submitted a bid for PMCF Wave Two funding and were successful in securing a further £4.4 million.

Life after the consortium

Over the course of the first two years of the One Care Consortium programme, the need for an organisation that would enable GP practices across Bristol, North Somerset and South Gloucestershire to speak with one voice began to emerge. This became particularly important to ensure GP involvement in the development of Sustainability and Transformation Plans. Therefore, we put out a manifesto to our practices asking them to vote on 21 June 2016 on whether or not they wanted One Care to become their GP organisation.

Following an overwhelming vote of confidence at the end of June, we agreed our Articles of Association and registered One Care (BNSSG) Ltd on 1 September 2016 as a company limited by way of shares. Each of our shareholders purchased a £1 nominal share in the company.
In late 2019, we officially converted to a Community Interest Company (CIC). A Community Interest Company (CIC) is a special form of a non-charitable limited company, which exists primarily to benefit a community or pursue a social purpose, rather than to make a profit for shareholders.

Although we were initially set up as a limited company (with BNSSG practices as our shareholders), we committed not to pay dividends to shareholders, instead reinvesting any profits back to general practice in BNSSG. This is fundamental to our and BNSSG practices’ principles and, as such, CIC status is a perfect fit.

According to The King's Fund, "Integrated care systems (ICSs) are partnerships that bring
Read more >