We’d like to welcome you to our newly updated website! We’ve worked hard to update all of our old content to better reflect how we work, and how you can access support from us.

On the new ‘What we do’ page, you can now explore the range of services we offer to our practices, PCNs and localities – covering a range of areas including digital, business intelligence and practice management. You can also find out more on our wider support we offer across the UK.

On the ‘Our story’ page, you can read about the journey One Care has had so far – starting in 2014 following a successful bid with the GP Access Fund – initially known as the Prime Minister’s Challenge Fund.

Lastly, don’t forget to have a look at our new ‘Meet the team’ page! There, you can ‘meet’ us all and – particularly in a time when so many of us are working remotely due to COVID-19 – you can hopefully put a face to a name you may already work with now!

We hope you enjoy exploring our new site and we’re always keen to receive feedback on how we can make it better. If you have any ideas, please don’t hesitate to get in touch!

Following a formal vote at our recent Shareholders’ Meeting, we are happy to announce that One Care has now officially converted to a Community Interest Company (CIC). We chose to convert primarily to improve our success rate when seeking to win NHS contracts and to open doors when engaging with the wider NHS system. In addition, we believe that this change better reflects who we are and what we do as a federation, representing BNSSG general practices and bringing benefit to our local communities.

What is a Community Interest Company?

A Community Interest Company (CIC) is a special form of a non-charitable limited company, which exists primarily to benefit a community or pursue a social purpose, rather than to make a profit for shareholders.

Although One Care has initially set up as a limited company (with BNSSG practices as our shareholders), we have committed not to pay dividends to shareholders. Instead, we reinvest any profits back to general practice in BNSSG. This is fundamental to our and BNSSG practices’ principles and, as such, CIC status is a perfect fit. For these reasons, a number of other GP Federations and similar organisations have converted to CIC status.

What was the process for converting to a CIC?

Having reviewed the benefits, the One Care Board – with representatives from practices across BNSSG – recommended to our shareholders that we convert to a CIC. In order to do this:

Once the resolution was passed, we applied to become a CIC, submitting an application form (CIC37) to Companies House stating our company’s aims and why its activities would benefit the community. Our application has now been accepted.

If you have any further questions about what is means for One Care to become a CIC, please don’t hesitate to get in touch!

We are seeking feedback and comments from BNSSG patients to update and deliver Healthier Together’s Primary Care Strategy.

Our renewed Primary Care Strategy will set out the transformation of Primary Care services, which includes dentistry, optometry and community pharmacy, with general practice at the heart. As more and more care shifts out of hospital into the community, it is important that those commissioning the care, delivering the care and experiencing the care all share the same vision and understanding of Primary Care.

Over the past couple of months, and building on the feedback practices gave us at our shareholder event last November, we have been working with many of you to develop our One Care offer to practices, PCNs and localities.

By clicking on the image below, you will find a copy of our offer to practices. To align with this release, we have also updated our One Care portal hosted by Clarity TeamNet. The link to our portal can be found in the top right-hand corner on our site.

Finally, this website is currently under construction to reflect our new services so watch this space for more!! 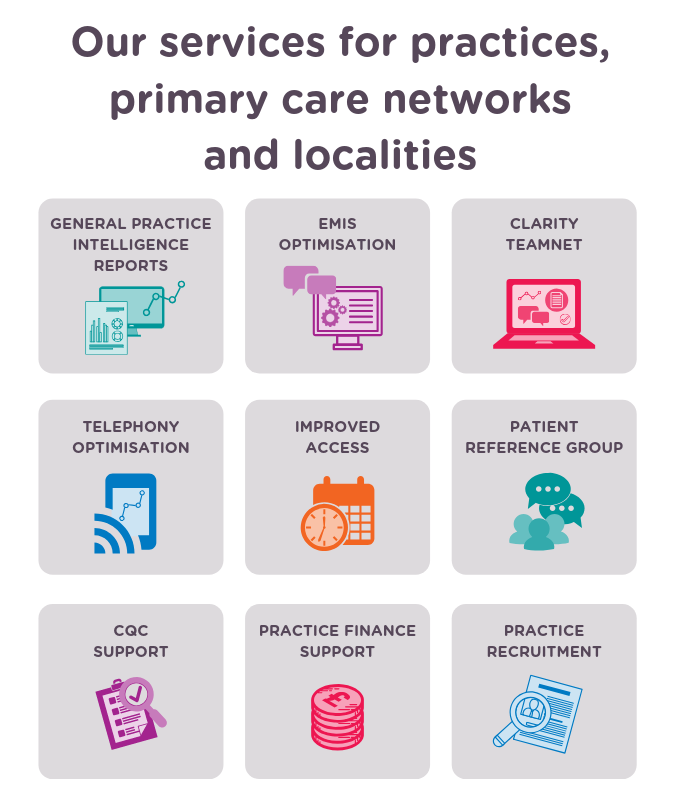 At our Board meeting yesterday, we officially said goodbye and a huge thank you to our outgoing Chair John Heather, who has been a fantastic advocate for One Care over the last few years. Thankfully, we will keep John’s wealth of experience and knowledge as he will remain as a member of our Board representing the Weston locality.

We thanked him with a big cake and card signed by all the other members of the Board – see the photos on Twitter.

As announced earlier in February, Simon Bradley has been elected as our new Independent Chair.

GP paperwork has been on the rise for a number of years, which was recognised as one of the key issues for general practice in the GP Forward View. As a result of this, all practices were offered funding to attend training to help with their document management processes. In July 2017, we began working with EPI, a local training provider, to offer workflow optimisation training sessions to our practices. The project has recently come to an end, so we have been working on an evaluation of how successful it has been.  The aims of this project were to:

The training was provided to 167 members of practice staff from 58 practices (around 70% of all One Care practices). We measured the success of these sessions by giving attendees a feedback form. It was very well-received and rated highly by practices:

“Well led and run, very experienced GP knowledge in implementing and working with the system”.

99.3% of attendees said they would recommend the seminar to colleagues and 81.4% said the training was excellent (18.6% said good).  In 2018, we worked with Hanham Health to create a case study about their experience of the training and experience of implementing their learnings in practice.

We did encounter some challenges in delivering this training programme. Often practices found it difficult to spare appropriate staff members to attend. Also, it was difficult to measure how effectively the training has been implemented in practices without doing more follow up, which means in many cases we are not sure to what degree it has increased efficiency and released clinical capacity. We will be looking to carry out some follow up work over the coming months.

If you’re keen to find out more, or read the full evaluation, get in touch.

Following a competitive recruitment process, the Board is delighted to announce the appointment of Dr Simon Bradley as our new Independent Chair with immediate effect. Simon replaces Dr John Heather who resigned at the end of last year. The Board would like to thank John for all his hard work and dedication to the role and we are delighted that he will remain as a member of the Board representing the Weston Locality Board.

This independent GP leadership role is new in our governance structure. It’s different to our previous Chair role, as we wanted to recruit someone who is a GP in a BNSSG practice but not a member of a locality board or has a role in the governance of any other organisation. The purpose of this role will be to be an advocate for general practice and to work with Ruth Taylor and the Exec Team to ensure that One Care continues to understand and meet the needs of its shareholder practices.

Our vision is to enable general practice to survive and thrive. So, we wanted to find a way to demonstrate the positive impact of our work on day-to-day practice activities.

That’s why we’ve published our impact report for 2018 as a timeline of a ‘day in the life’ of a GP practice in BNSSG. It provides a snapshot of some of the ways practices can use the tools and services we provide. It also includes some quotes and feedback we’ve received.

We hope you find it a useful and interesting way of looking at what we do and how it can support our member practices.

We’ve been working with some of our practices to provide ‘improved access to general practice‘ since 2016, with more practices getting involved over that time. In October, practices provided the most hours since the service began – so more patients than ever in this area were able to access their practice at evenings or weekends. This is a relatively unique way of providing this service, as elsewhere in the country, appointments often take place at one or two locations called ‘hubs’.

Improved access appointments take place before 8.00am and after 6.30pm on weekdays, and anytime on Saturdays, Sundays and Bank Holidays. Practices are working together in groups (‘localities’) to deliver these additional early morning, evening or weekend appointments. We’ve had some very positive feedback from practices about how this positively impacts both them and their patients:

“Our patients actually like the facility to have a telephone discussion over the weekend – preferably Sunday – and now actually ask for a specific call. It means they don’t have to come in and they are always there to speak to, so our DNA rate is reduced.”

“We have found being able to increase the hours of opening very helpful to our patients. We can now offer more Practice Nurse appointments on Saturday mornings which in turn means patients do not have to go to other providers for dressings etc over the weekend.”

We also work in partnership with other organisations to provide some of these appointments, one of which is the MSK assessment service with PhysioNet. In Bristol, North Somerset and South Gloucestershire, all improved access services can be accessed by contacting your registered GP practice.

The national NHS England communications campaign to remind patients that they can access their GP during evenings and weekends over the famously busy winter period starts today – so look out for this in both traditional (newspapers, billboards) and social media.

Ockham Healthcare is a thinktank and consultancy. They identify, promote and support best practice and new ways of working in General Practice. Their website contains lots of useful blog posts and they publish a weekly General Practice Podcast.

This week’s feature someone you should recognise – our very own Dr Jake Lee. Jake talks about the One Care journey – what we do and how we do it.

Episode 138: Jake Lee – One Care: a large, successful federation in the south west